Back to Medford Page

Twin Bridges Antique Productions, promoters of quality events since 1982, was asked by Mrs. Bear of Country Heart Promotions to take over promotion of the Medford Armory Show in 2008. “We are honored to continue promotion of this quality event and to benefit Dogs for better Lives, a most deserving service organization”, says Carole Berry, Promoter.

MEET LINDA LEE
& TOUR HER SHOP
ON HER WEBSITE

Not available at the October 2021 Show
Contact Appraisers Directly

Opportunity Quilts from Jacksonville Museum Quilters Guild are displayed at the
Medford Antiques & Vintage Shows.
For information on purchasing raffle tickets
for current Opportunity Quilts, contact them at
quilts4us@yahoo.com

“Who needs a ladder to hang quilts
when you have Dan! “
Beth Mould & Dan Mathern

STEP INTO THE PAST… THE WONDERFUL WORLD OF QUILTING

When collectors entered the Medford Armory for the Fall 2017 Antiques & Vintage Shows Benefitting Dogs For The Deaf, they got a glimpse into the wonderful and historically significant world of quilting. Mountain Stars and Jacksonville Quilters Guilds created a spectacular display of rare and unique quilts from the balconies of the Armory. Nell Mathern, quilt educator once again coordinated the Guilds’ participation in this Event. “It’s an honor we get to come and hang the quilts, it’s a wonderful venue. Its exciting and fun to see the antiques and talk with the dealers,” says Nell Mathern. Patrons purchased raffle tickets for two fabulous opportunity quilts, “Blue Danube” and “Vintage Garden,” both on display at the Show. In addition, there were demonstrations of needleturn appliqué and hand quilting on a 1930’s quilt. Jacksonville Museum Quilters, under the guidance of Dora Scheidecker began in 1979. They held a Quilt Show every year for 34 years until the historic U.S. Hotel in Jacksonville was no longer available. “The Jacksonville Guild does hand quilting, applique, and in the past years, made some very beautiful historic quilts depicting our local area. Those special quilts have been given to the Jackson County Genealogy Library and they are good about displaying them often with great stories to tell of each quilt and the pioneers that lived in our region”, says Nell Mathern.

Nell Mathern is featured on a YouTube Video which provides extensive and important historical information on 1930’s quilts and life during that era. The Video was presented at the National Model A Ford Awards Banquet, hosted in Medford, OR. Nell’s fascinating glimpse into the meaning of early quilting gives the modern day viewer a wealth of information. For example, an 1880’s quilt, called a mourning quilt, put together from blocks by the Jacksonville Quilters tells the story of how widows wore black in their first year of mourning, followed by a grayish black their second year, which was a signal that the widow was now available, i.e. wearing a secondary mourning cloth. Another interesting piece of history is demonstrated in a 1930’s quilt with a whisker guard, made from feed sack and attached to the top edge of the quilt since men’s beards were so oily they would have ruined the quilt!

Nell Mathern may be reached at: jnmathern@gmail.com.

Volunteers from the Wood House Preservation Group take part in the Medford Armory Show. Since the beginning in 1870, the Wood House has fought heavy rains, snow, the Columbus Day Storm, hail, fire, vandalism and county politics, and through all of this the house still remains to welcome you to come and visit. See how western primitive living really was in the late 1800’s. Mission Statement: To preserve, protect and cultivate local history at the Wood House through activities, tours, and educational events, thereby creating awareness and prolonging Rogue Valley history.

Harlan and Barbara Parsons
Medford, OR

by Erick Paul of The Antique Consortium
University Place, WA

A Step Into The Past: A Fabulous Feedsack Collection!

Feedsacks bring to mind poverty of the Great Depression, but at the same time there is a romance to the idea that women could make something beautiful from something so mundane. In truth, feedsacks were used for sewing well before the Great Depression (1929 to 1939) and for several years after. The evolution of the feed sack is a story of ingenuity and clever marketing. Several Feed companies produced booklets giving ideas and patterns for the use of feedsacks.

Please visit Jacksonville Quilters Guilds’ Booth at the Medford Armory Antiques & Vintage Sale to see a fabulous “Feedsack” collection. Meet Hazel who is wearing a feedsack dress. At the same Booth you can admire a couple of quilts representing the “Model A Ford Club of America”. You’ll also have a chance to see Model A’s, which were only manufactured from 1928-1931, on display in the Armory’s Parking Lot.

FEEDSACK DISPLAY
With Hazel at the
Medford Armory Show

The Story of Barbara & Harlan Parsons

When dealers and collectors shop the Medford Armory Antiques & Vintage Sale Benefitting DOGS for better LIVES, Barbara and Harlan Parsons, Medford OR are always there with youthful smiles and a spectacular display, specializing in country kitchen primitives. Avid collectors since the 1950’s, the Parsons will celebrate their 70th wedding anniversary on November 19, 2019. They met in 1949 at a 4th of July Carnival at Port Hueneme, CA (near Oxnard) where Harlan’s ship was stationed in harbor. He was nineteen and Barbara, still in school was sixteen. Four months later they married and became life long soul mates, building a wonderful life together and pursuing their passion for antiques. Discharged from the Navy in 1951, Harlan worked as a foreman at Oxnard Glass Company for thirty-eight years. Barbara went to work packing lemons in a lemon house. When their son, Steven was born in 1952, Barbara became a stay-at-home Mom.”

The Parsons’ passion for collecting antiques began “when we fell in love with a fourteen-inch coffee grinder, bought it and from then on really went all out collecting, a bit of everything, mostly tinware, we saw one thing then another!” says Barbara. They started out with a space in an antique mall in Ventura CA “with ritzy stuff and a few primitives,” says Barbara. In 1977, when a building across the street became available, the owners of the “ritzy stuff shop” encouraged them to open their own Shop, and “the rest is history.” Once they opened their Shop in the 1970’s, they also sold for a while at the iconic Rose Bowl (one of California’s largest swap meets.) While running their shop in Ventura for seventeen years, they became good friends with many long time customers. Their Shop was so successful that Harlan eventually quit his “day job” so he could do refinishing and help run the Shop. They continued to be known for their country kitchen primitives. They began traveling a lot to shop for antiques, closing their Shop Sunday through Tuesday and even a week at a time. Their antiquing journeys took them as far north as Washington, an eleven hundred mile journey! They also had a “great picker from back East who sold to them,” says Barbara. “We’d visit shops, shows, always buying!” In 1989 the Parsons decided to make a major life change, closed their shop in Oxnard CA, relocating to Medford OR in 1991. “We got rid of everything, had a BIG sale, moved up there, then ‘twiddled our thumbs’ so decided to open a space at Main Antique Mall in Medford,” says Barbara. After five years, they switched to 6th Street Antiques in Grants, Pass OR, owned by Carmen and Yvonne Herrala who are also dealers at the current Medford Armory Show. When the Herralas retired and closed their shop, the Parsons starting doing shows. In 1997, the Parsons took part in their first Show at the Medford Armory with S.O.A.C.C. (Southern Oregon Antiques & Collectibles Club.) Shortly after, they also began doing Phyllis Bear’s Medford Armory Antique Show Benefitting DOGS for the DEAF (now called DOGS for better LIVES), promoted by Carole Berry of Twin Bridges Antique Productions since 2008. In their early days in Oregon, the Parsons also did out-of-state shows, but now only Loleta CA and the biannual Show at the Medford Armory.

After almost seventy years, the Parsons still have a passion for collecting. Tinware is still Barbara’s favorite. Harlan has always had a passion for coffee memorabilia, i.e., signs, tins, grinders and wooden ware. “There’s not too much we don’t care for! When people say it’s a disease [collecting] it really is! It gets in your blood, you’re always looking. Sometimes its always out there if you look. If you look at a whole Show, you can find the neatest stuff. Sometimes you find something you’ve been looking for for years, and there it is! Sometimes you see something and aren’t sure if you really like it. It may not be there ever again, just depends on the item, so if you really want it, get it, you may never see it again at any price! Most dealers and collectors know that part of collecting is looking for the unusual and eventually you do find it!” says Barbara.

“Graniteware used to be very popular, not so much now. You don’t see books and magazines. When we had our Shop, everyone read the magazines and asked for those things. Books help a lot. If I love something, I read up about it. Antique books are interesting,” says Barbara. Pursuing her passion for kitchenware, “years ago we didn’t have all of these ‘electric things’, there was a gadget for everything! You had to start from scratch in the old days, that’s what I like about kitchenware, its interesting, fun to read about” says Barbara.

With their 70th Anniversary coming up in November, the Parsons plan on continuing to keep going as long as they can. Their son, Steven is a big help. “Collecting antiques, you meet the nicest people on this earth, people we never would have met. Harlan and I have a lot of nice memories,” says Barbara. The Parsons like to have their cherished collectibles out where they can see them at home. “It’s nice we both like the same kind of stuff, not always the case” says Barbara. One part of their kitchen is like a country store, so they can see and enjoy their many treasures collected over the years.

Update as of 9/2021:  The Parsons have retired from doing Shows.  They do, however plan on visiting the October Medford Show!

Back to Medford page. 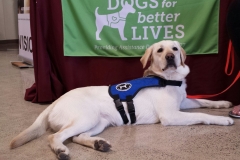 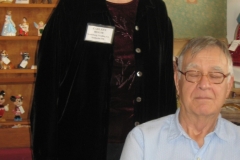 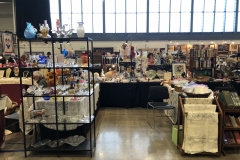 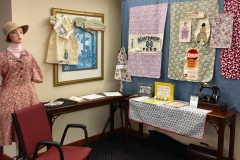 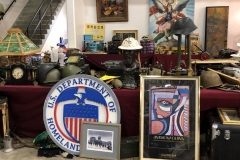 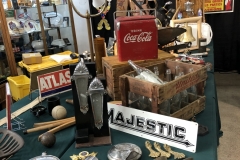 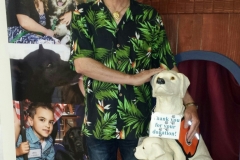 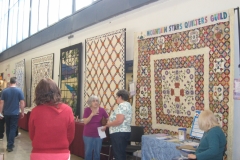 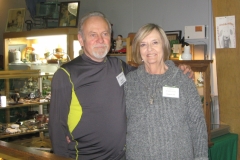 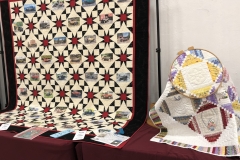 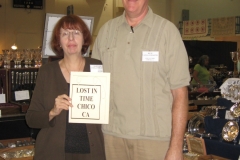 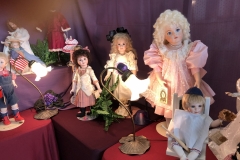 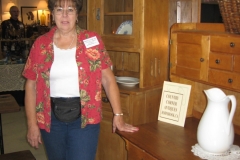 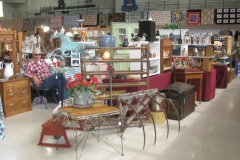 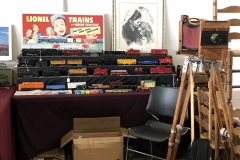 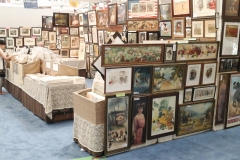 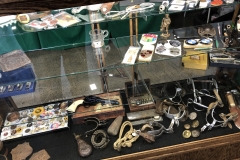 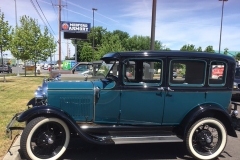 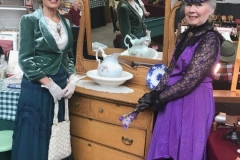 <– back to Medford Main Page